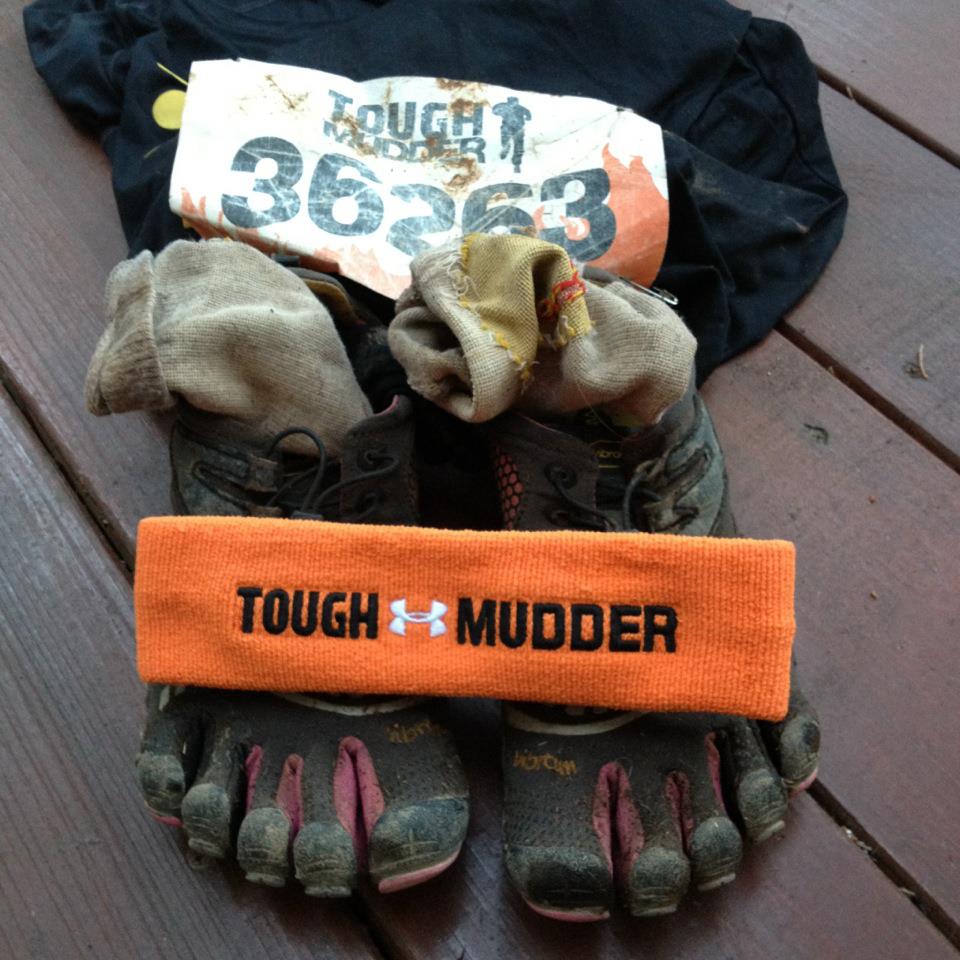 I have been racking my brain for the last couple of hours and lingering in major writers block trying to figure out the words to describe my experience from yesterday’s Tough Mudder event, and I’m at a loss. Not because there are no words to describe the event but because there are a million words and thoughts that come to mind: madness, crazy, awesome, emotional, holy crap, wow, smile, accomplishment, amazing, painful, scary, tough. I’ve had a few people ask how it went and simply saying it was amazing would be an understatement.  So I’ll do my best to describe it based on what I can remember (parts of it are a blur). I can say this though, it was a challenge of the body and the mind and completing it not only earned me the Tough Mudder badge of honor but put some fears to rest. I have never seen so many passionate people drop their egos, face their fears, and work together to accomplish a challenge. I can truly say that this was a life changing challenge.

When I first signed up for Tough Mudder I didn’t know much about it and figured I’d cross that bridge once I got there. I was already training for endurance with my cycling events and had a solid yoga practice and crossfit wods 3 times a week, so I wasn’t too worried about physical preparation. I was up for a challenge and my goal was to do whatever it took to complete it. But naturally as the day got closer my nerves kicked in. Tough Mudder isn’t your average run in the park; the 10-12 mile obstacle course is designed by British Special Forces to test all around strength, stamina, mental grit, and camaraderie. The one thing they tell you right upfront is if you’re here to get the fastest time and do it ALONE then good luck to you because it ain’t happening. Unlike other races this one is not about time, it’s about completing. Getting through the 20 some obstacles in one piece in itself is a badge of honor. Compared to other mud runs and obstacleathalons, Tough Mudder has the best obstacles and most innovative courses, it’s no wonder they have gone from 3 to 60 events with over half million participants. Most importantly Tough Mudder supports and brings awareness to the Wounded Warrior Project. So as you can see this isn’t your ordinary half marathon, it’s a half marathon on steroids!

After signing away my life away on a 4 page waiver (no joke) I proceeded to registration, got tagged with a number on my forehead, banded with a wristband and directed to the start line. I met up with my team of 5 who were also newbies and strangers who quickly became friends in the process of climbing over a wall to get to the start line. Our team of 5 grew to a team of hundreds as we stood together and pledged to “leave no mudder behind” and patted our new friends on the back. It was evident that this was not a race but a journey to the finish line.

Within a quarter mile I found myself on a ledge looking down at a pool of water and heads bobbing up. My worst nightmare was in front of me and before I had a chance to think I heard the guy next to me scream ” when her head comes up you jump” I looked at him with the look of death, saw the girls head come up and stood on the ledge with fright. I heard him scream “jump, now, jump!” and before I knew it I was submerged in ice cold water trying to get to the top before my muscles froze. My head came up and I was screaming with fear and panic (not a good combo) trying to move my frozen body the 100 feet to get out.  I didn’t think I was going to make it; I looked up and saw my teammate reach his arm out I caught it and he pulled me out as another teammate pushed me up. Before I had a chance to think about what just happened we were already jogging to warm our bodies up.  At least the worse was out of the way. Note to self: don’t wear glasses or a nose ring when plunging into water, both flew off immediately.

No sooner did the shock wear off we were we were faced with the first set of Berlin walls and quickly strategized on how to get over, teamwork paid off here and we were on our way to confront the Arctic Enema. This is how TM describes it “first you must bravely jump into Big Mudder’s floating iceberg abyss. Once submerged, find the mental and physical strength to swim through the ice, under a wooden plank and pull yourself out on the other end before you become hypothermic.” I stared down at the pool of ice and then at the plank and contemplated skipping this obstacle. The guy that was manning the obstacle encouraged me to get in and do it “get in, feel for the bottom of the plank and pull yourself under and out the other end” it sounded simple. As I write this recalling the obstacle, I can’t remember exactly HOW I did it but I DID. I plunged in and before I could think about how cold the water was I made my way to the plank, felt for the bottom, held my breath and quickly went under hoping I would make it out the other end, which was heavy and thick with ice. At this point my limbs started going numb and without hesitation I took the helping hand in front of me to make my way out. Fear number two conquered, lesson learned. Even when you are in the thick of things and can’t see the end, move forward, pull yourself through the obstacles, and the end will appear. We shook of the ice and started running, which soon slowed to a jog and then a hike, as we started uphill to the peak of the slope. Shivering and wet we encountered another set of walls, even taller than the first. Using the same strategy we got over.

The next few challenges felt like a cakewalk compared to what we had already encountered. Log Bog Jog had us climbing over under logs avoiding the barbed wire. We then carried a heavy log along our hike and the Wounded Warrior Walk had me on a teammates back and vice a versa. By this point I was feeling pretty confident and having fun. I had conquered my two feared challenges and falling in water with the Funky Monkey, monkey bars, was welcomed.  Just when I thought we were out of the woods we got to the Electric Eel, a pool full of water with dangling electric wires hanging overhead. I took the longest with this challenge, because I didn’t know what to expect, was I going to get shocked the entire time? An initial test made my leg flinch at the shock, I stepped back and took a breath. I wasn’t willing to walk around this one so I had to figure out how to do it. A little shock can’t kill you. I looked across at all my teammates who had already gotten to the other side, they guided me in and across and before I knew it I was out the water. Another set of walls later we were at the 8-mile mark and nearing the end.

There were some challenges like the Boa Constructor that looked more intimidating than hard, the thought of being in a tube with water up to my neck made me cringe with claustrophobia but it wasn’t bad once I got in. Same goes for the dark underground Trenches, which tested my trust in the TM organization that there wouldn’t be rodents hanging on the tunnel walls, thankfully there weren’t. The Mud Mile was disgustingly fun, and put the Mud in Tough Mudder, we walked chest high in mud and climbed our way over slippery mud walls arriving at the other end a little dirtier than we started. A water obstacle was definitely in order and sure enough scaling the thin ledge like wall had me plunging into another pool of water. With only 100 yards to go I was a little disappointed that this course didn’t include the Everest and the Electroshock Therapy, of course I spoke too soon. With the finish line in site we had to first run up Everest, a total team effort with those on top reaching down to grab even a finger of those running up. Once over the mountain the final challenge awaited us. Dozens of wire hung down in close proximity to one another, come carrying as much as 10,000 voltage of shock, enough to take down the toughest mudder let alone ME. At this point I knew I was going to complete this challenge it was just a matter of when. As individuals we feared the shock and stood there waiting for someone to lead the way but together as a team we were unstoppable even fear couldn’t get in our way, with 100′s of mudders I charged through wires.

When I was telling my brother about the event last night he asked “So what’d you get for finishing, was there a medal?” Nope no medal to add to the collection, instead an orange headband was placed on my forehead, a shirt thrown over my shoulder, and life changing experience under my belt. The accomplishment of overcoming my monkey mind was worth every shiver, shock, and bruise I collected.

For more information about Tough Mudder or Wounded Warrior Project visit their websites.

As always don’t just take my word for it, try it out for yourself and report back. Post to comments…

Ritu Riyat MPH|Holistic Health and Nutrition Counselor| Yoga Therapist is a San Francisco based Health Counselor promoting universal wellness via Skype consultations, and seminars. Delivering simple techniques to add balance through food, movement, and meditation.  She is an avid cyclist, crossfitter and yogini. Her motto “food is a drug, eat responsibly”… Nutritionize now!

Ritu Riyat is an applied yoga and mindfulness expert. She equips her clients with tools to reconnect with their bodies, eliminate stress, and make more informed decisions about their health and well being.

One thought on “Surviving The Tough Mudder”